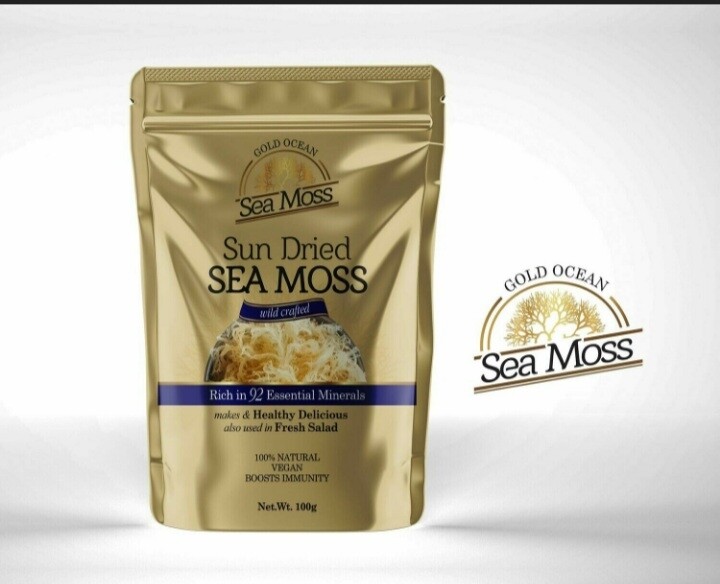 Gold Ocean Sea Moss 100g mixed blended gold purple and green Sea Moss is nutritiously natural. St Lucian Sea Moss has maximum potency for all your therapeutic needs. It has one of the highest concentrations of Calcium in the world. Strengthening your immune system.

BOOSTS YOUR IMMUNITY: Irish sea moss has been used in the Caribbean in traditional medicine for its role in alleviating the symptoms of the common cold and flu and other ailments. Why? Because it contains antimicrobial and antiviral compounds, which help boost your immunity and stay healthy Sea Moss natural anti-inflammatory properties may alleviate the symptoms of arthritis and relieve muscular aches and painful joints.

DIGESTIVE SUPPORT: Because of the amazing effects of Sea Moss on the mucous membranes in the body, it works as an amazing digestive aid. It coats the stomach and helps to heal the body of ulcers. It also helps to provide probiotics for improved gut health. Irish sea moss is also packed with fiber and vitamins and minerals that regulate bowel movement and alleviates gas.

SMOOTHS SKIN & BODY: Alleviates skin diseases like the chronic skin condition psoriasis. New figures show Psoriasis affects around 1.1 million people in the UK. Around 1.7% of the UK population are affected. Taken internally and applied topically, especially for skin conditions like eczema. It can be applied while taking baths and on wet skin as a cream then washed off and thus hydrates your skin. Irish sea moss used as lotion supports the skin's natural moisture barrier, keeping harmful, drying external elements out and beneficial moisture in sea moss has natural anti-inflammatory properties that may alleviate the symptoms of arthritis and relieve muscular aches and painful joints.


Is there a difference between Irish moss and sea moss?

No, it's the same thing sea moss helps relieve and prevent symptoms of colds and flu – how perfect for the cold and flu season, but also for year-round immunity. Irish moss is a source of potassium chloride, a nutrient that helps to dissolve catarrhs (inflammation and phlegm in the mucous membranes), which cause congestion.

Do you know that the body is made up of 102 minerals, 92 of which are also found in sea moss?

What Irish sea moss Gels do for you?

Use Irish Sea Moss gel in your food or skin as a mask. It helps to tighten the skin and minimise pores while adding minerals. Use the gel as a thickener in cooking or smoothies, soups, porridge. Consume within 3 weeks and keep refrigerated. Can also be frozen for up to 3 months in an ice tray.

This amazing superfood can be used in, cooking, health drinks, smoothies as a thickening ingredient for sauces and desserts. Cook or eat raw for best results. Irish Sea Moss has been used in traditional medicine for 1000 years.

Sea Moss Gel naturally contains iodine. Please avoid consumption for all those with allergies to fish or shellfish.